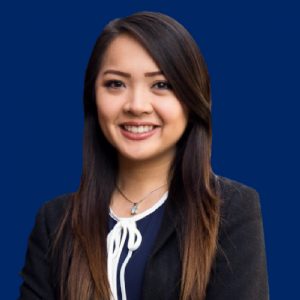 Monica Zafra has dedicated her career to being a public service advocate which is seen in her scholarship throughout her law school career. As a first-generation daughter of immigrants from the Philippines, she has witnessed the importance of effective and compassionate representation for those who do not understand the intricacies of the legal system.

She obtained a Bachelor’s of Arts in Political Science from the University of California Irvine in 2015. Afterward, she worked for a solo practitioner focused in Family Law, which solidified her interest and passion for the law. She pursued her Juris Doctor at McGeorge School of Law and graduated in 2020 with a concentration in International Law. While at McGeorge she worked for McGeorge’s Immigration Clinic and externed for Wilner & O’Reilly, a business immigration firm.

Monica is a Los Angeles native and grew up as a Laker fan. Her favorite players growing up were Kobe Bryant and Robert Horry, and now of course Lebron James. She is also a fan of BTS and is appreciative of their advocacy, especially in their work with the UN.

As she embarks on her career, Monica’s dream is to continue to pursue immigration on an international scale and represent clients from various regions of the world, particularly those from her parents’ home country of the Philippines.

Monica is fluent in English and Tagalog.