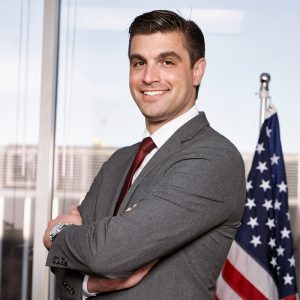 Daniel Infuso, Esq. is an advocate for the injured, fiercely seeking truth on behalf of clients. His aptitude and diligence in negotiations are zenith in the art of the deal.

He obtained a Bachelor’s of Arts in Music Production from California Lutheran University, including making the Dean’s list in 2013. Shortly after, he attended University of the Pacific, McGeorge School of Law in 2014. While at McGeorge, Daniel won his case in trial advocacy, against the school’s team who traveled the whole nation. He is licensed in the United States District Court Central District, and is licensed to practice law in California’s state courts.

He enjoys watching soccer games and his favorite team is Italy’s Azzurri and cheers them on in the national league. He has been following the team, and loves when they win. He also enjoys playing card games, particularly Texas hold’em, and Baccarat.

Daniel is also a CAALA member since 2019 and is part of the nation’s largest associations for plaintiffs’ attorneys.

He successfully resolved matters against major business entities including, Mercedes-Benz, Costco, Numero Uno, Modelo, Presto, Food-4-Less, Allstate, State Farm, among many others. Daniel enjoys practicing tort law and is successful in settling many complex legal matters, as he makes his clients feel like family.